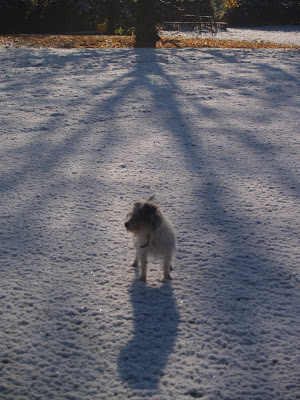 It snowed last night. Wet snow, the sort that doesn't usually settle, especially in Oxfordshire in October. I don't ever remember snow here in autumn, although someone said that the last time it happened was 38 years ago, so I probably should. Didn't think it would still be on the ground this morning, but it was: frozen and crunchy underfoot in the bright dripping sunshine. 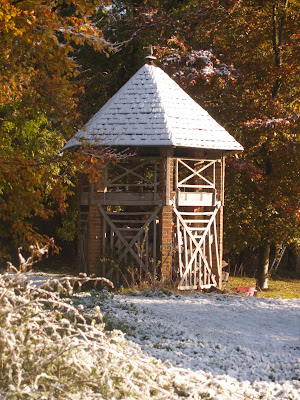 The book I am reading tempted me to linger a little under the duvet ... The Rose Grower, by Michelle de Kretser, an almost poetic evocation of life and love during the French revolution. With roses. And food.

It was in December, thinks Saint-Pierre, two or three days before Christmas. He remembers opening a window and the way a line of snow collapsed inwards, onto the ledge; but that might have been on another occasion. He had stood on one foot beside his grandmother, leaning against this very table, and she showed him how to make cruchade. Half a century later, he still finds himself craving its warm, sweet blandness.

His older daughters wrinkle their noses at it, but his grandson loves cruchade and Mathilde is not altogether immune. A dish for children and old men. A winter dish, unsuited to high summer. But Berthe would of course have served it at dinner, if he'd asked. He didn't, for three reasons: he takes pleasure in preparing it himself; he believes his version superior to Berthe's; he doesn't want to have to share.

The mixture of maize flour, milk and a little butter has cooked slowly, thickening to the right consistency. He turns it out onto a linen cloth and blows on it, willing it to cool faster.

The night house sighs and shifts. Then settles itself, groaning. Through the kitchen window he can see a lopsided white moon.

... There is no armagnac to be found, so Saint-Pierre pours out a glass of Berthe's plum brandy. He can't resist breaking off a corner of the solidifying cruchade. His eyebrows twitch in anticipation.

... So Saint-Pierre can't lay his hands on any sugar - really, where does Berthe squirrel these things away? - but a pot of her apricot jam from the previous summer will do just as well. In fact, he prefers jam. With the point of a knife, he draws a diamond grid on the surface of the cruchade; then he cuts along the lines.

... He begins frying. The butter sizzles .. Saint-Pierre is wielding a slotted spoon, lifting the golden-yellow diamonds onto a plate .. a thick layer of apricot jam is spread on the cruchade.

"It's an old regional dish." Saint-Pierre holds out the plate. "Not to everyone's taste," he says hopefully. "Try a small piece."

Cruchade is said to be a Gascon treat, but I can't find any trace of it on the web or in a book, not even in Elizabeth David or the magisterial Oxford Companion to Food. It sounds like a variation of polenta - worth trying if you have a sweet tooth.


I'm sending this post to The Food Quote Challenge at a new-ish blog called Almond and the Hazelnut .... the idea is to post food writing from a non-food book - Yasmin announced this challenge a couple of days ago, and then this passage from The Rose Grower shouted out at me. The deadline for the food quote challenge is November 25th. And if anyone knows any more about cruchade, I'd love to hear from them.

That's bizarre. It snowed last night in Ottawa too.

Hi Clare ... as you say, bizarre. Your snow will probably hang around until spring, ours is already nearly gone - having caused such chaos that Lucius couldn't get to work, even though there was never more than the inch in the photographs.

But now I find that it hasn't snowed in the south of England in October since 1938, which means I definitely can't remember it :)

your dog is insanely cute.

Beautiful pictures, Joanna. You're right about this being akin to polenta I noticed via google. Now I know what this is called whenever I use millet!

Doesn't Trump look sweet! Our snow was pretty much gone in the morning, but I forgot to tell you, that I went outside to dance while it was snowing and some people came out of the flats and looked at me like I was mad!
Also All the trains were stopped in the morning so it took me 3 hours to get to work!
I'll have to borrow that book off you, it looks good,

Library Mermaid, you have NO IDEA how appropriate is your use of the word insanely in connection with my dog .... she is lovely but lunatic

Thanks for the compliment Labelga ...

E: it's a great book. Wish I'd seen the dance - I'd have joined in. Sorry about your journey, though. Extraordinary the chaos an inch of snow causes in this country

You had far more snow than we did, but still, snow in October! Good grief!

Thanks for the info on the food literature challenge too. I immediately thought of the mushrooms mentioned in Lord of the Rings when I read it as a child. I mmediately had to go out to buy some mushrooms to make mucshrooms on toast!

OMG - it's SO long since I read Ld of the Rings that I'd completely forgotten any mention of food, let alone mushrooms. You're making me hungry ;) - will you be blogging the passage, save me finding the book in the mess that is my daughter's room, and then wading through to find the passage ;;)