A plate of nibbles for drinks 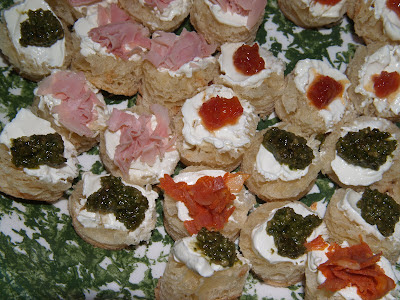 The night before my sister and her family left for home (California) via a week in Spain, she had a drinks party. It's been non-stop partying for nearly three weeks while she's been here, so no-one felt like making a huge effort. But, at the same time, drinks without nibbles - well, it's not really a party, is it?

I needed to reduce the croissant mountain (not many of the young felt like breakfast the morning after the night before), so that was my starting point. I halved them and stamped out rounds, using a biscuit cutter ("You mean a cookie cutter?" said my sister, who no longer speaks entirely the same language as I do, after 20 years in the US). Normally I'd use bread, then toast it in a hot oven, but the essence of this sort of cooking is to use what you have.

Next I spread a little light Phillie on them, and, finally, put tiny dabs of this and that on the top - chorizo, ham, chilli jam, pesto, olive. They went in seconds, despite fierce competition from the cocktail sausages my father insists on at every party.

I am ashamed to admit that I could happy live on canapés. These look great. What a good idea to use croissants.

Isn't is wild how well necessity can work to your advantage sometimes.
Yes you have to have nibbles for a party.

A brilliantly simple and delicious solution Joanna - just the ticket!