Toad in the hole with fried kale and stuffed mushrooms

So, after getting the boys to write down their favourite food, I didn't have any excuses: toad in the hole for lunch. But I couldn't resist trying kale on the side. Kale is not on anyone's mmmm, delicious list, but I thought I'd try it anyway - with garlic slivers and little bits of bacon, two things they actively like, and a little sugar. It tasted just like the so-called seaweed you get in a Chinese restaurant, and was very good, although Alfred didn't eat much. There were also stuffed mushrooms: Alfred ate one without comment, Horatio said he liked the stuffing but not the mushroom.

Last night we went to dinner with Dick and DD at the boathouse down by the river. We sat out on the verandah as the light faded, fed the ducks - and ourselves. DD made a wonderful potato salad in the morning: she boiled some potato chunks, dressed them with a lemony vinaigrette and ribbons of crisply fried onion, and left it all to marinade all day while she went out boating and read a thriller. And there was a lovely French bean salad, with chopped hard-boiled egg and slivers of fennel. Not something I could easily serve here. But just the thing for a jaded mother.

Fry some chopped bacon in oil; add slivers of garlic. Cook until the bacon is well browned. Add chopped kale and a spoonful of sugar. Cook for 10 minutes. Serve hot. 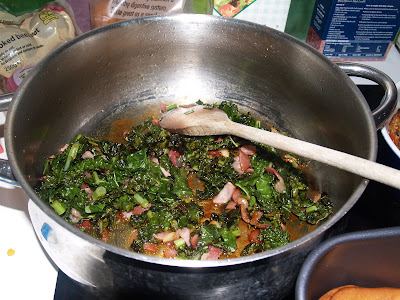 Easy peasy: remove the stalks from the mushrooms, put them in a food processor with a slice of bread, a de-seeded tomato, a spring onion, a little cheese. Blitz; stuff the mushrooms; cook in a hot oven for 20 minutes.

Horatio said it would have been better in a different vegetable, but he couldn't think which ... I suggest tomato or courgette.


Toad in the hole

Make a batter with three eggs, 1/2 a pint of milk, 4 oz of plain flour and a pinch of salt. Put the sausages into a baking tin and into a hot oven for 10-15 minutes until they start to brown. Pour on the batter (through a sieve if there are a lot of lumps), and bake for half an hour until the batter is well risen and browned.

(These quantities are for a large roasting tin, and did four of us with three sausages each; I would have used the same quantity of batter for six. The main thing is to give the batter plenty of room to rise.) 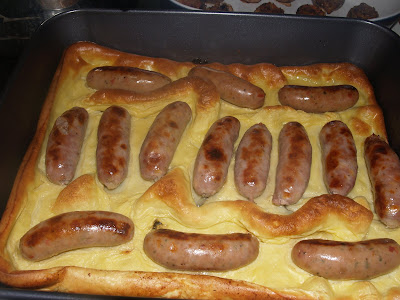 A teenage guide to eating

When both the boys said YEeeeuuuuuuch to all my suggestions for lunch, I asked them to write down the all food they actually like eating. They both have a tendency to be fussy eaters - at one stage, Alfred (aged about four) would only eat pizza, but not if it had anything other than tomato sauce and grated cheddar. Horatio's always been prepared to be adventurous: aged about seven, he ordered and ate a plate of moules in a busy Brussels restaurant, and they've been a favourite ever since.

Here's the list. It's a little book. It took them half an hour. The second edition is due out soon, because they said they couldn't be put on the spot if they were expected to remember everything. 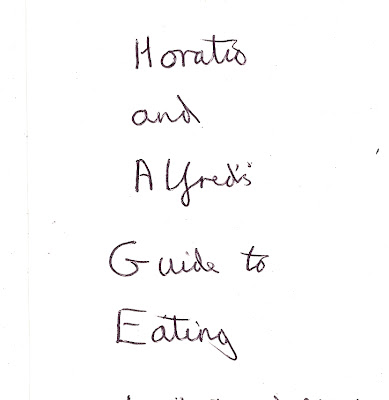 The big ambition of the title page gives way to - well, I leave that to you to decide (it's just that I wish they wouldn't make the yeuch noise when we are eating legumes as a side dish) 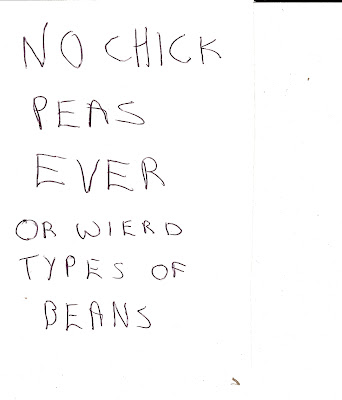 Meat is the thing they like to eat best, it's what they always request ... and they'd much rather not be fobbed off with fish, or vegetables. Pasta's okay, so long as it isn't too fancy. As you see, macaroni cheese is given honorary meat status. 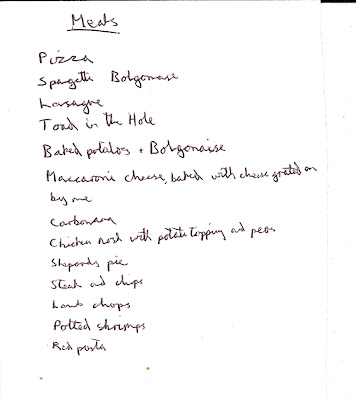 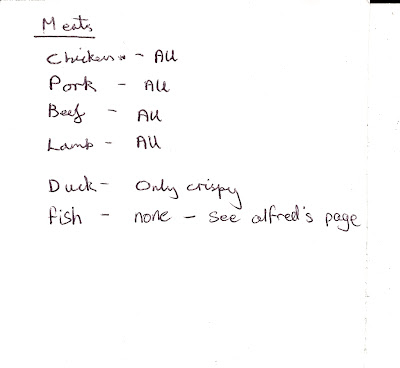 The list of vegetables they'll eat is surprisingly long (and includes tomatoes, only Horatio is too pedantic to put them in this list). But they don't like any of these veg mucked about - it's no use thinking you could make guacamole, or that you might strip the corn off the cob to make, say, cornbread. Just plain, thank you, and preferably covered in butter. 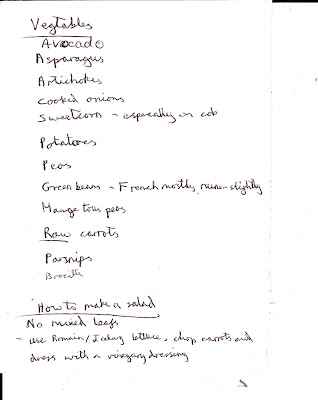 As for fruit: well, I've never known either of them to choose to eat fruit, although they will if cajoled. Interesting that neither of them mentions bananas - not sure if they've been forgotten, or whether they truly are disliked. 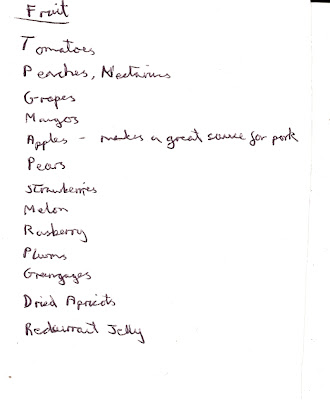 I can (& frequently do) cook three meals a day for them, yet still come down in the morning to find the detritus of late-night cooking. This is a list of what they like. Microwave popcorn is never on my shopping list because of the horrible additives .... but they don't use their own money to buy it, they just complain that I won't (even though the kitchen is well supplied with old-fashioned popping corn). 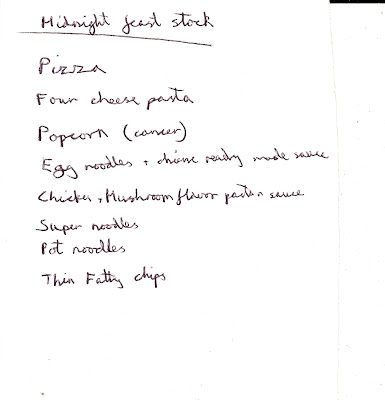 The last two pages are lists of individual favourites. Alfred won't eat anything spicy hot, unlike Horatio, but he's very keen on making toasted sandwiches in a press. 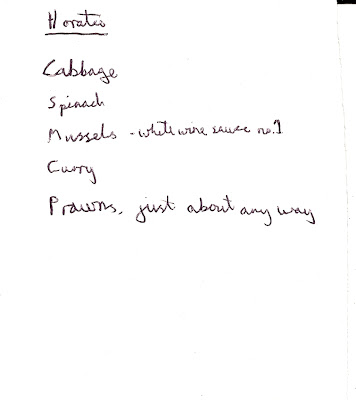 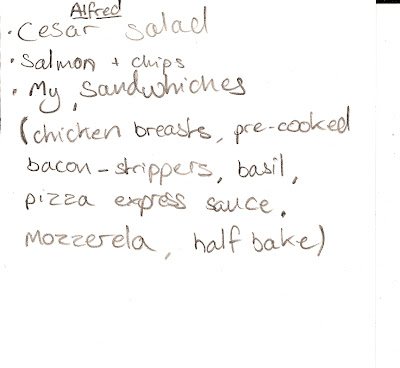 I don't have any idea how typical this list is for teenage boys. What do your teenagers eat? Any tips for widening their palates? And lessening their dependency on processed foods and on meat?

This is what a 16-year-old chooses for his breakfast. With orange juice. 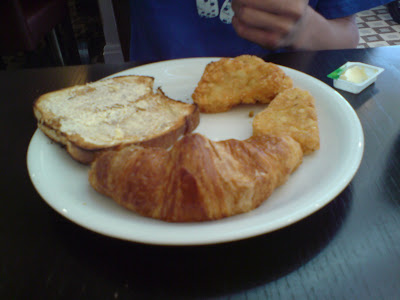 I took this(on my phone) a couple of days ago in Doncaster, before our drive more or less the length of England. Blazing hot sunshine all the way, until we reached the Lizard, the southernmost point of the British mainland - since then, we've been living in a cloud.

Here is the view from our bedroom window: WHERE IS THE SEA??? However, the consolation is that I am making an elaborate loaf of bread using Gilchester Farm flour bought in Northumberland, the Andrew Whitley recipe on the back of the packet, and the fresh yeast I bought in the health food shop in Helston. 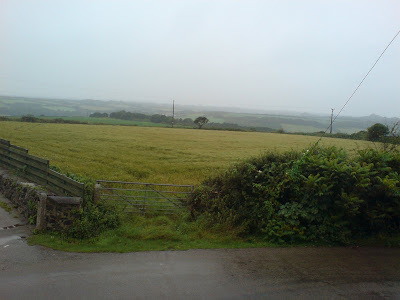 When I was in Essaouira on the coast of Morocco a few years ago, I saw women bringing their tagines to cook in the neighbourhood wood-fired oven. Yesterday, I saw a lovely 14th century English communal oven at Corbridge, last used in the 19th century. Perhaps, now that we are suddenly mindful of the need for fuel economy, it's an idea we could usefully revive? How wonderful if this one were restored to use ....

Two views of the River Tyne Dodging the showers, I've had a busy day ... Corbridge first thing, then on to Langley to visit the Garden Station, then to Wallington - knock-out - and back to Hallgarth Manor through the centre of Newcastle. These photographs were each taken from a bridge: top, from the Gateshead Millennium Bridge (looking towards Stephenson's High Level Bridge and the Tyne Bridge); bottom, from the 17th century bridge at Corbridge.