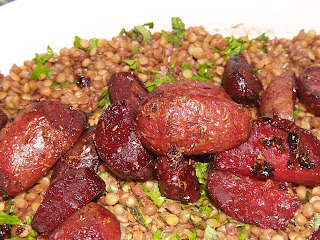 The people who live in this house divide between those who think lentils all taste the same (horrid, mushy, nasty, pointless, to use a few recent descriptions), and the person who is a bit of a lentil connoisseur. That person was pleased to discover that Merchant Gourmet has started to import a new type from Spain, pardina lentils, and found them on introductory offer in Waitrose.

New recipe needed for new lentils: I decided to serve them with roasted spiced beetroot, pinching this idea from Sarah Raven's new Garden Cookbook (although completely changing the nature of her original dish). I like to try new lentil recipes, as, ever the optimist, I am sure that one day I will find a dish all my family will devour - and legumes are such heart-healthy food that I like to persevere in the face of severe discouragement.

Cook 150g lentils in a mix of white wine and water, with slivers of garlic (actually, homemade stock would be better, and plain water would do just as well). I would normally use Puy lentils, which would take around 20 minutes to get to the tender-not-mushy stage; the pardina lentils took nearly 40. Meanwhile, roast four or five beetroots, coating them with olive oil, and a mush of the following spices bashed in your mortar: two star anise, seeds from 4 cardammoms, and 2 teaspoons each of juniper berries, caraway and cumin seeds. This aromatic combination will bring out the earthiness and sweetness of the beetroot. I nearly didn't bother with the cumin, because I often don't like the note it imparts, but here - well, try it for yourself.

When the lentils had finished cooking, I tasted them, and found them sharp, rather unpleasantly sharp. No chance of changing any minds about lentils. What to do? Looking in the fridge for redcurrant jelly, I found instead blackcurrant jelly, and put a tablespoonful into the lentils, where it melted away. I then added chopped mint and parsley, less than I wanted, because we seem to have weeded away most of the mint plants (they have come to rest, inconveniently, in a rose bed), and because of course the rabbits have got to the parsley first. A big handful of each would be ideal.

I put the lentils onto a shallow dish, and strewed the sliced beetroot over. Delicious. The boys made a terrible fuss (two horrible foods at once, etc) before eating a miniscule amount, Lettice ate only the beetroot with one or two lentils clinging, and Lucius ate it silently, with the air of someone concentrating hard on doing his duty. I ate lots. I'd have liked it better with fat juicy black Puy lentils. Turns out pardino is Spanish for small and grey!


PS this is my entry for Weekend Herb Blogging, hosted this week by Anna at Anna's Cool Finds

The dish sounds lovely - but I may stick to the lentiles du Puy. I have a dh that stoically does his duty as well when I fix lentils... which I dearly love, both for themselves and because they're so heart healthy. At least he eats them ;-)

We had the leftovers for lunch, and they were even better, because all the flavours had worked their way into the lentils. Lucius said that he had liked them last night - but he couldn't see his face while he was eating them ;-)

And Katie, definitely, stick to Puy, in any case, I'm not sure you'd find Spanish lentils in France!

Have you tried sprouting lentils? it completely transforms them from mushy and pointless to crucnhy and salad-ish. There are instructions here:
http://www.bean-sprouts.blogspot.com/2006/08/bean-sprouts.html

Beetroot and lentils sound divine! I have four types of lentils in my cupboard right now; I just love them all!

Did you reheat the dish for lunch or have it cold? Did the lentils stand up okay if you did reheat it?

Melanie - I sometimes sprout seeds, but have never thought of using lentils, and that's what I'll do with the rest of the mildly unsatisfactory Spanish greys ... thanks for the suggestions

Joe - as it happens, I didn't reheat these ones, just got them out of the fridge half an hour before we were going to eat, so that they were at room temperature. They do tend to go a big mushy when you reheat them (although perhaps that wouldn't happen if you microwaved them???), so when I do that, I often chop some more fresh herbs, or a little spring onion, into the mix so that it doesn't feel quite so much like leftovers!

Susan ... Anna ... beetroot and lentils, a match made in heaven ... and good with a little goats cheese or feta, too

I'd love to try pardina lentils too - even though they don't sound as good as our favorite Puy. Just in the interest of science. Not sure where to find them here, but I'll have a look. And I love the flavors you used for the beets! I've never used those spices with them before, and it sounds heavenly. Something I may even try today as it's rainy and gray!

Amanda, I'd never used that combination of spices with beetroot before, and I'd really recommend it. Normally I used garlic and thyme when I roast beetroot, and that's delicious, but I'm glad I've got this for a change - I think it's a little more of a winter-y flavoured dish, but, looking out of our windows here, you'd hardly know it was summer.

Lentil and beets, one of my very favorites
Spanish lentils I'll have to look for.

That dish sounds delicious! I love lentils and beetroot...

Joanna - I wonder if you can advise which spices to add to beetroot. I remember a delicious jellyish cubed beetroot salad, & I was told it originated in Egypt. But I have not been able to reproduce it. Hope the River is not threatening you.

I'm a huge lentil fan. One of my all-time favorite dishes is Mujadara, a middle eastern dish with lentils, rice,and carmelized onions. Have not heard of this type of lentil, so thanks for enlightening me.

Thank you very much for sharing.
Through your blog, a lot of people including me of course have a chance to read and learn from.
I have read some of your post and I really enjoyed reading it.
And if you want to learn chinese,please visit at
http://www.chinesepal.cn/first/learn-chinese/index.htm
Thanks again and looking forward for more of your posting soon!

At first I was marveled to see such a blog.Your blog is sparkling. It has a great appeal. How are U able to cope such a lot. Meet me at
http://gwb-chinese.blogspot.com/
Waiting with curiosity. To know your innovation.