Parsnips are just beginning to appear in the shops (although they'll be sweeter once there's been a frost). Lettice made dinner last night, a very good slow roast of pork (1.8 kg took three hours at 140C). She chose to make her favourite winter vegetable dish, creamed parsnips, and she'd be the first to admit they weren't a great triumph.

It's often best to go back to the beginning when you've had a culinary disaster. So I'm giving the recipes here; they're from Jane Grigson's Vegetable Book, and they appear consecutively. She also gives a John Evelyn recipe for buttered parsnips dating back to 1699, which you serve with a bowl of sugar and cinnamon and a bowl of melted butter. Maybe we'll skip that one.

Scrub, boil and cool the parsnips under the cold tap. Peel off the skin and slice or quarter them as appropriate to their size. Cut away any hard core. Melt a good generous knob of butter in a frying pan and turn the pieces over and over in it, adding plenty of pepper. They should not brown or fry in any proper sense of the word. They just need to absorb butteriness. Add a little extra butter and plenty of chopped parsley, or a mixture of parsley, chives and tarragon, and serve with meat, with cod, or on their own.

Follow the recipe for buttered parsnips, but pour on some whipping or double cream before you add the herbs. Not a great deal, just enough to make a coating sauce, with the pan juices.

I use spices rather than herbs - mainly nutmeg. Next time I'll try using herbs.

And remember: they just need to absorb the butteriness. It's amazing what a treat you can make out of the humble parsnip with a little care.

Just back from seeing the film of the book of the blog, Julie and Julia. At last, I understand about J Child - a sort of American Delia, but human, and a better cook. Funny how she doesn't figure at all here.

I liked Julie better than in the blog or the book. And there were moments for bloggers to treasure - the first comment, the who's-reading-this-rubbish-anyway, the decisions about what to include, who to leave out, the way blogging becomes part of your life.

I went on my own, but I'm going to get the film on DVD the day it comes out so that my family watch .... then perhaps they'll understand that my blogging, although occasionally embarrassing (think camera in restaurant), is not even near obsessional. (Or quite as lucrative.) 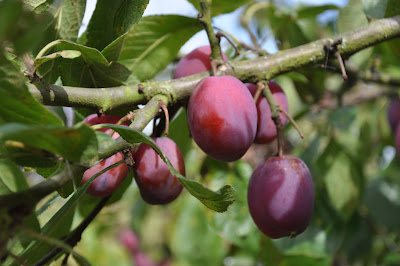 Last night was the last time until Christmas that all six of us will sit down together to eat. So I made a quick pudding - I went into the garden in the gloaming, picked a few sticky-sweet Victoria plums, halved and stoned them and put them on a sheet of puff pastry which I'd brushed with jam made from last year's crop. 15 minutes in a hot oven. Mmm ... except for one thing: those fabulously sweet plums turned sour in the oven. Any ideas why this should be? 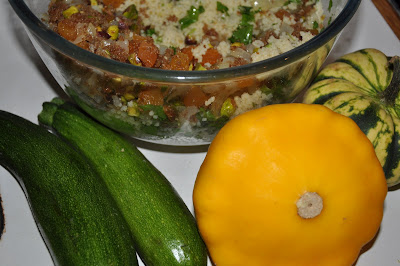 We had a delicious dinner last night, courtesy of ideas from Nigel Slater's new book - although I probably could have made something similar after reading one of his old ones.

I have a bit of a love/hate relationship with Slater - it irritates me that he treats himself as one of the immortals in the Observer Food Monthly magazine that he edits. On the other hand, his journalism keeps him in the moment, and he's very good at reinventing the same ideas for a new day. So cook-your-own-veg was always going to be the topic for the next book (actually the next two, this announces itself as volume one).

Since his plot is a tiny London garden, and since he buys most of the veg he eats, he's aware that he's a candidate for Pseud's Corner, which results in some nicely self-mocking moments. But there's a little too much smugness, and this made me laugh out loud:

Watching someone you love eat a tomato you have grown yourself makes it more than just a tomato. It becomes a source of glorious, yet strangely humbling, pleasure.

Overall, A cook and his vegetable patch is good. After you've read the introductory pages, it's a book for browsing and consulting rather than reading straight through; it's arranged alphabetically by vegetable and/or groups of vegetable - lots of plants you'd like to eat and grow.

It's not quite sure whether to be a gardening book or a cookery book (and not quite so successful at blending the two as Christopher Lloyd's Gardener Cook). So there aren't always horticultural notes, but there are lists and lists of Slater's favourite varieties.

Here, for instance, is his list of chard (since there's still just time to sow one last row, something I should be doing right now):

Wavy Leaf What it says on the packet.

Last night, I wanted to tackle the courgette and summer squash mountain that has been quietly stacking up here. So the new book was an obvious place to look for inspiration (it's definitely that moment of the summer when I'm literally fed up with my "usual" courgette recipes). Since the courgettes were to be the main part of the meal, I chose to make Slater's fruit and nut filling to sprinkle onto a dish of sliced squash, accompanied by a little mince fried to crispy nubbly delicious lumps (typical Slater, something he's written about before). And there was an interesting cold dill sauce to go with it.

I followed the instructions pretty accurately for the stuffing/topping. Next time, I wouldn't bother with the couscous, I'd just use breadcrumbs for a softer result. 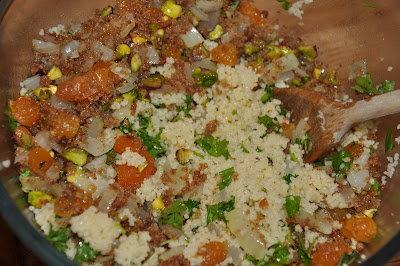 Fruit and nut filling for baked courgettes
for 4

Pour the stock onto the couscous, add a glug of olive oil, cover with a plate for 10 minutes. Soften the onion in some oil; add the breadcrumbs, apricot and pistachios. Take off the heat. When the couscous has taken up all the liquid, mix in the breadcrumbs, herbs and zest.

Halve the courgettes lengthwise and put in a single layer in an ovenproof dish. Sprinkle on the stuffing, then cover with foil or greaseproof paper.

They'll take about half an hour, more if you've put in some slices of summer squash.

Finely chop a small bunch of dill. Bash a clove of garlic and combine with 2 tablespoons of wine vinegar, 3 of olive oil, and 4 of yoghurt.

If you want to turn this into a sort of deconstructed traditional stuffed marrow, then cook some mince: Heat a little oil in a frying pan; when it is smoking hot, drop in pieces of mince and LEAVE THEM until they have crisped at the edges. Add dill, chopped garlic, lemon zest, chilli jam (or chopped fresh chilli). Turn the meat. When it's cooked through, add salt and chopped parsley before serving. Slater's recipe uses minced pork; I used minced beef because that was what I had.

PS I take some of this back: I've just spotted that NS no longer edits the Observer Food Monthly. But someone, maybe the telly critic, did describe him as God in last weekend's paper. Harrumph

The sun's shining hot today, perhaps we'll have an Indian summer, so then we'll need something lovely to drink ... and here's the method for making a Venetian spritz:

a little ice and a slice of lemon

There's masses more about this traditional treat from the Veneto at Living Venice. Thanks for the reminder, Nan

Lettice and I went to the market this morning. I found damsons and Kent cobnuts; Lettice found mussels. We ate them for lunch - quick, easy, delicious.

Cook the mussels as if you were making moules marinière. Cook the spaghetti. Soften a few halved tiny tomatoes in a frying pan with some oil (and perhaps a little basil). When everything has finished cooking, serve it together in hot soup plates: put the spaghetti in first, next the tomatoes, then the mussels, then the soup. Fabulous.


PS a kilo will easily do four people served this way

Lettice asked for scones. I made these, following the recipe used at the Lanesborough Hotel in London. As you'd expect from somewhere so swank, this is an extravagent version of a homely classic ... but the egg makes a particularly soft dough - and uses up some of the glut we've got here. Well worth trying.

Sift the flour, add the bp, rub in the butter, then stir in the sugar. Beat the egg in the milk and add to the flour mixture. Gently gather it together into a soft dough, pat it out to an inch thick (you'll need a little flour on the work surface and your fingers), then cut into rounds. I made nine.

Put the scones onto a lightly floured baking sheet*, bake for 10-12 minutes. Cool on a wire rack. Eat warm.

* You could brush the dough with a little milk at this point, but I didn't bother 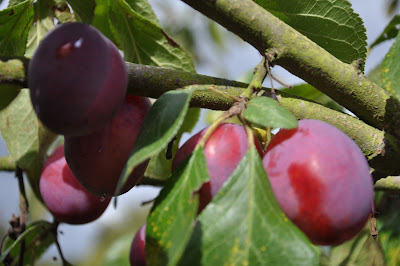 Back from Scotland to find a HUGE glut of plums, despite thinning the tree when the fruit set. The Victoria plums are good to eat, but can't begin to compete with the greengages on a neighbouring tree, which taste as sweet as any fruit I've ever eaten. So the gages are all being eaten where they grew, only the purple plums are getting as far as the kitchen.

I made this very good sauce to go with roast belly of pork (which I smeared with olive oil and chopped thyme, sprinkled with a little Maldon salt, then roasted for half an hour at 220C and an hour at 180 - great crackling, or, if not, then a quick blast at the highest temperature your oven will crank up to).

Halve and stone the plums. Chop the onions. Place in a roasting tray with all the other ingredients. This needs about an hour at 180C, so it went into the oven with the pork when I turned down the heat.