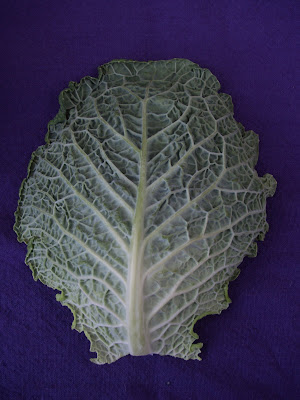 It's a great way to stretch a little mince twice as far. Thrifty, eco-friendly, heart-healthy. All in one little green parcel. Good to eat, too. In fact, both the people who turned up their noses at the idea of stuffed cabbage ate seconds (you know who you are).

And if you think this is a little fiddly, then split the work into two: cook the mince in one session, assemble the little packages in another. It doesn't take long, and is oddly soothing. It's also a dish that can be made ahead and kept in the fridge.

You could use any mince you happened to have left over, or you could cook some specially. Either way, it needs to be well flavoured, because you're going to add bread (or rice). I used fresh breadcrumbs, liberally mixed with chopped herbs, but if there had been some cooked rice in the fridge, I'd have used that. 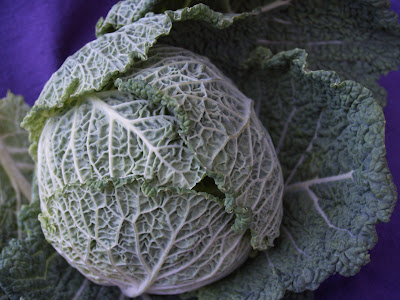 You also need a green cabbage which hasn't had all its outer leaves trimmed off before you get to it. The big leaves are much easier to fill, for one thing, and they are - in this dish - much tastier than the little yellow ones in the middle. Save those for a coleslaw.

You'll have gathered that what follows is not a recipe that needs to be followed to the letter; it's more of a method, one I hope you'll try, because this thrifty dish is delicious, and well worth reviving.

outer leaves of a large cabbage

a little stock/passata/wine and water etc

Gently sweat the onions. When they are soft, add the bacon and fry till cooked. Add the paprika and cook for a further couple of minutes. Tip into a large bowl. Brown the mince. Add to the bowl. Blitz the bread (it needs to be something better than cheap sliced white), then add the herbs. The exact amount of bread depends on how thrifty you are needing to be; just bear in mind that the more bread you add, the more flavouring you should use. Add to the bowl. Mix everything together, then stir in the egg to bind the mixture.

Meanwhile, blanch the cabbage leaves in a large saucepan of water. They need to be dropped into boiling water for a couple of minutes. Drain and cool in a colander. Cut out the inflexible part of the spine.

Wrap little dollops of the mixture in the leaves, fixing with a toothpick if necessary (and it only will be with the smaller inner leaves). Lay the parcels in a shallow baking dish. When it's full, put a little liquid into the base. This can be stock, a little wine and water, even plain water. Cover the dish, and bake in a medium oven for about an hour and a half.

I dotted last night's stuffed cabbage with little tomatoes, in the hope that they would cook down into a tomato sauce, but no such luck. All the same, they were a good, easy accompaniment. And another option for the liquid would be tomato passata. 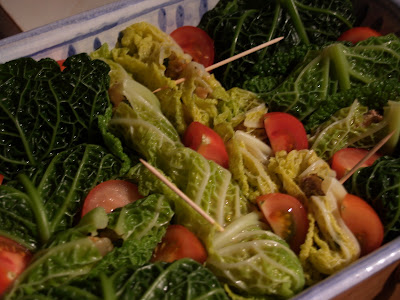 What a beautiful colorful bunch! Tucked so beautifully. I haven't stuffed cabbage for so long and it is good. Divide the work is right on.

Yum. And I completely agree with your dad. ;-)

Definitely agree with your Dad Joanna!

We love cabbage and I'd choose it over lettuce in salad any day. Only ever cooked stuffed cabbage once but you've inspired me to do it some more. I love making meals stretch...

Stuffed cabbage is great, one of my favourites which I haved not cooked for ages. Thanks for reminding me: your version is very attractively presented.

Thanks for kind words ... it's definitely something I'll make again, whatever my children think/say - there's a story here, too boring to recount, you wouldn't think the "children" in question were both adults ;)