The Old Sailor, by A.A. Milne 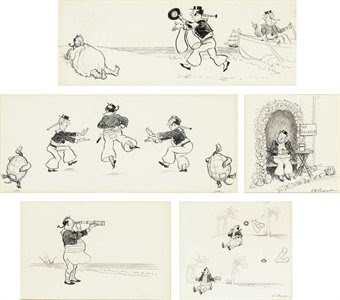 The Old Sailor
by A.A. Milne

There was once an old sailor my grandfather knew
Who had so many things which he wanted to do
That, whenever he thought it was time to begin,
He couldn't because of the state he was in.

And, thinking of this, he remembered a thing
Which he wanted (for water) and that was a spring;
And he thought that to talk to he'd look for, and keep
(If he found it) a goat, or some chickens and sheep.

Then, because of the weather, he wanted a hut
With a door (to come in by) which opened and shut
(With a jerk, which was useful if snakes were about),
And a very strong lock to keep savages out.

He began on the fish-hooks, and when he'd begun
He decided he couldn't because of the sun.
So he knew what he ought to begin with, and that
Was to find, or to make, a large sun-stopping hat.

He was making the hat with some leaves from a tree,
When he thought, "I'm as hot as a body can be,
And I've nothing to take for my terrible thirst;
So I'll look for a spring, and I'll look for it first."

Then he thought as he started, "Oh, dear and oh, dear!
I'll be lonely tomorrow with nobody here!"
So he made in his note-book a couple of notes:
"I must first find some chickens" and "No, I mean goats."

He had just seen a goat (which he knew by the shape)
When he thought, "But I must have boat for escape.
But a boat means a sail, which means needles and thread;
So I'd better sit down and make needles instead."

He began on a needle, but thought as he worked,
That, if this was an island where savages lurked,
Sitting safe in his hut he'd have nothing to fear,
Whereas now they might suddenly breathe in his ear!

So he thought of his hut ... and he thought of his boat,
And his hat and his breeks, and his chickens and goat,
And the hooks (for his food) and the spring (for his thirst) ...
But he never could think which he ought to do first.

And so in the end he did nothing at all,
But basked on the shingle wrapped up in a shawl.
And I think it was dreadful the way he behaved -
He did nothing but bask until he was saved!

Boy, oh boy, is that ever good. I have this trouble. I stop myself when I go in too many directions in my head. I think that happens when one has a lot of interests, but it must be a kind of human condition thing to have been written up in a poem, wouldn't you think? This is one of those things where I say, hey that's me you're talking about! And I guess it may be many others as well. Thank you so much for posting it. Have you ever read Milne's mystery book? I liked it very much.

This is a great poem! I've never read it before. Good to see you back up and posting! I was really starting to worry about you!