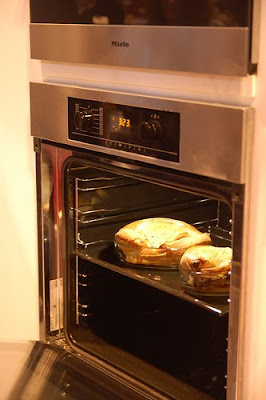 I've never been very good at making Yorkshire pudding. Years of cooking on an Aga meant that by the time the meat was perfectly roasted, there wasn't enough heat left for the puds. Years of pudding failure = deep-seated belief that my Yorkshires would always be a flat soggy mess.

But now, I have a foolproof recipe. I first came across it when I was cooking on the Miele stand at the BBC food show; we made the batter into toad-in-the-hole. Yesterday, I made a huge ballooning effortless Yorkshire. Eggs. The secret is eggs. Lots of them. Not quite Mrs Beeton ("take 2 dozen eggs"), but I reckon this method uses at least twice the usual amount of eggs, so of course it's not going to remain pancake-flat.

I've just spent a merry morning looking up recipes for Yorkshire pudding; Hannah Glasse, Jane Grigson, Elizabeth David, Mrs Ruffell, Michael Smith ... they're all more or less agreed on two eggs to half a pint of milk and enough flour for a pouring cream consistency. But here's an interesting thing: Yorkshire pudding is merely a parsimoniously thin version of batter pudding, one of the earliest dishes in English cookery - think thick Yorkshire pudding. Truth to tell, this would be a batter pudding if you chose too small a tin.

I got a lot of complaints last night about serving this with lamb. I think it's a shame to forego something so deliciously eggy for the sake of a tradition which is almost certainly invented. Next time we'll have it with roast chicken.

This is Jane Grigson's tip about what to do if there's any left:

On roast-beef Sundays, my mother's father, who had reached heights of power and respectability in the Bank of England, forgot what was due to his position and remembered the ways of the Northumbrian farm at Old Bewick which his family had come from. The roast beef went back to the kitchen after the main course, but the Yorkshire pudding remained to be finished up with sweetened condensed milk. I do not know how my grandmother took this - she prided herself on her desserts - but my mother shared his delight in the crisp and sticky pudding. When she had a home of her own, and a family, she passed his taste on to us who only remembered him, in spats and spectacles and pin-striped trousers, from old photographs.

equal quantities by volume* of:

Mix the flour into the eggs; when there are no lumps, slowly mix in the milk. Season: you'll definitely need salt; you could add chopped herbs. Let stand for half an hour.

* last night I used four eggs which came to the 200ml mark in a jug (that volume of flour weighed around 100g). The tin I used measured 25cm x 35cm, and the result was a crisp and thin Yorkshire; a smaller pan would give you batter pudding with these quantities.

Thank you for the recipe - I'll give it a go. Sometimes my Yorkshire Pud is spot on, sometimes not so good.

Don't worry about serving it with lamb - I'm from a family who served it will all roasts, including Christmas! and had variations with added fruit for desserts (not on coinciding days I hasten to add!). Grandad insisted on eating his Yorkshire pud as a first course with gravy before the roast was carved.

At my school in Yorkshire - during the 1950s - we used to have Yorkshire pudding with golden syrup as a dessert.

I love yorkshire puddings - but we only have them with roast beef or with toad in the hole...both go down a treat in our house... mmmmm especially with a nice rich meat juice gravy!! Now I am hungry.

So glad it's not just me that's had problems with Yorkshires, Celia. This is a good way for hen-keepers to use up spare eggs, so it's win-win

Clare, I think we had Yorkshire pud with golden syrup at my school too (60s).

Ah yes, gravy .... just the thing to go with an abundant Yorkshire pud!

The trick is hot fat - lots of it, dont be affraid to use lard!
I wouldn't use it for anything else, but for yorkie puds you cant beat it!


We bumped into your blog and we really liked it - great recipes YUM YUM.
We would like to add it to the Petitchef.com.

We would be delighted if you could add your blog to Petitchef so that our users can, as us,
enjoy your recipes.

Petitchef is a french based Cooking recipes Portal. Several hundred Blogs are already members
and benefit from their exposure on Petitchef.com.

To add your site to the Petitchef family you can use http://en.petitchef.com/?obj=front&action=site_ajout_form or just go to Petitchef.com and click on "Add your site"