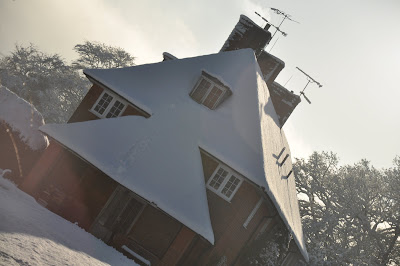 We're snowed in here, so it's been a day of quiet pleasures: a walk round the wood, a little photography, some bird watching, a game of croquet in the snow, and Horatio is building an igloo which he plans to sleep in (shades of his father, for those with long memories). I had time to make a complex three-stage recipe, which in the ordinary way I wouldn't have bothered with: the most delicious brussels sprouts with caramelised garlic and crystalised lemon peel. So good that they'll be made here again and again.

Actually, this is a recipe you can make ahead: two of the three stages could easily be made the day before. And if you don't like brussels sprouts, you could leave them out and just have the caramelised garlic.

The unusual combination of flavours is the brainchild of Yotam Ottolenghi, and his recipe appeared in the Guardian on Saturday. 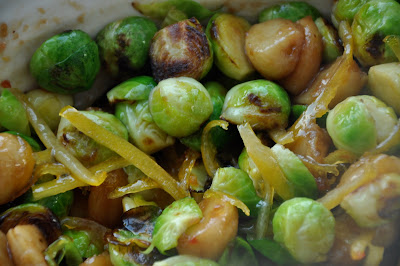 Put the garlic cloves in a pan of water and blanch for three minutes. Drain. Fry the garlic in a couple of tablespoons of olive oil; put them on a high heat and keep turning them until they are golden. Then put in a few drops of balsamic vinegar, a tablespoon of sugar, 90ml water and a pinch of salt. Simmer until there's virtually no liquid left (about five minutes).

Make julienne strips from the lemon peel (you can either use a potato peeler plus knife, or, if you've got it, one of those hole-y implements that make fine strips of zest). Put them in a small pan with a tablespoon of sugar, and the lemon juice made up to 100ml with a little water. Cook until the syrup is reduced to almost nothing (about 15 minutes).

Trim and halve the sprouts. Fry them in olive oil (in batches) at a high heat for about five minutes. Don't stir them more than once or twice, otherwise they won't char.

Stir everything together in a bowl (Ottolenghi specifies a chopped chilli, but I didn't have such a thing, so stirred in a couple of teaspoons of chilli jam). You may need to add more oil. Eat hot, or at room temperature.

PS Ottolenghi strew his dish with shaved parmesan and basil leaves, but I didn't; we don't have out-of-season basil leaves at this time of year, and the parmesan seemed to me to be over-egging the pudding. Unbelievably good without. 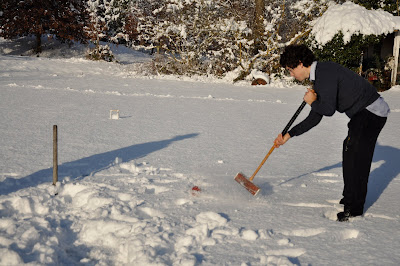 I’d like to personally invite you to join the CookEatShare Author network. CookEatShare has had over 2.5 million unique visitors in 2009, and I think they will be interested in your content. Users will be guided to your actual blog, so this is a free way to increase page views and visitors to your site.

These sound wonderful, esp. the chili jam! If you are sticking to just roasted garlic.... add some room temp cambazola and spread on the nearest bread OMG good;). Merry Christmas Joanna!

Hi Joanna, that sounds like a really tasty way to prepare brussels sprouts! Thanks for sharing. If you don't mind, I'd love to link our Foodista readers to your post. Just add your choice of widget to this post and you're all set!