A play-date at Miele Experience Centre

A week or two ago, I spent a very merry day at the Miele Experience Centre, trying out their kitchen equipment. We've got a little light kitchen remodelling to do here, and I've been humming and hawing about it for months. Not any more. I've got it all sorted. Nearly.

The Experience Centre is unique amongst white goods manufacturers: anyone can go (by appointment) and play with the full range, everything is "live" - ie plugged and plumbed in. You can even take your washing. But mostly, people go there to cook, guided by Miele's home economist Elspeth. 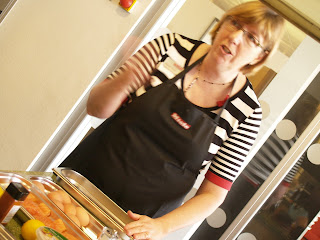 You might think that a cooker is a cooker is a cooker. But you'd be wrong. (Well, I was wrong.) The test kitchen has four work stations, and each of them is equipped slightly differently: a hob, ovens, plus one item which might be described as a novelty. There was a barbecue grill, a salamander (which is a fancy, space age sort of a grill that rises up out of the worktop), a tepanyaki hotplate, and a built-in wok. All good fun, if in total contrast to my Esse woodburning stove, and the Aga that I have cooked on for over 20 years.

Someone commented that this was scientific cooking ... all that programming is not the thing for an instinctive cook. On the other hand, here's something worth having - the whole range is integrated, so that all the trays and racks fit everything .... you can prepare food ahead, put it on a metal tray which slots into your fridge and later will go straight into your oven. Every last little detail has been thought about - top class design and engineering.

I'm not a great one for gadgets, but the built-in coffee maker is a dream. We won't need a microwave any more, as we only ever use it to heat up milk for hot chocolate. And we'll have a heated drawer, which will primarily be used for proving bread, although we'll never have an excuse for cold plates any more, and we'll be able to keep supper warm for late-comers.

Miele are kindly going to lend me a steam oven to play with .... people who have them say that they are the best; I just wonder if it's too scientific for me, if it would end up as the world's most expensive egg boiler. 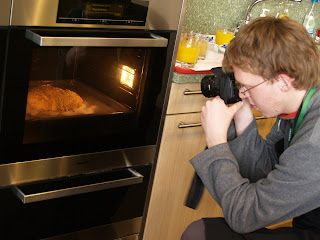 Anyone can spend the day at the Experience Centre, for which there's no charge (that's real confidence in your product), although my day there was specially arranged for a group of bloggers. I cooked with Sam, the Cycling Cook, whose post explains what we made. Also there were Alex from The Princess and the Recipe, Joy of Almanzo's Belly and Alex at Just Cook It. A great day out ... made perfect by Anna, the washing-up fairy, who made it possible for one fabulous day to cook without having to bother about clearing up. 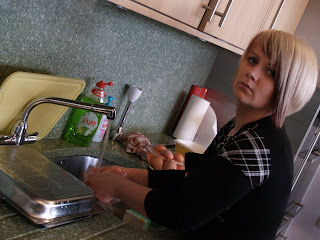 Beware though, you may end up, like me, thinking that there's really no alternative ...

Wow...what a great experience! I had no idea there was any such thing!

Joanna I am totally enthralled! I would love to be sucked into a day like that!! I'm drooling and I don't care what there is to eat!!

Oh and just so you know - that's the steam oven I'm lusting after.

BTW the fungi bit of the story IS true, the logo change is utter twaddle ;)

Wow. I wish there was one in Southern California! What a great idea on their part and even smarter to invite food bloggers to experience the whole thing. Good luck on your remodel!

We must have posted at the same time! I've just updated to include a link. Really enjoyed reading

What a great place! If I ever decide to invest in a new kitchen it will be worth going for a 'play'. It's all very well looking at showrooms and brochures, but you really need to get hands on.

I see that 'The Great Big Vegetable Challenge' blog are testing the steam oven for Miele – worth a look at what they're cooking up. (As I don't loiter around kitchen showrooms I didn't know they existed.)

OMG - we have to go!! We're not too happy with our (new-ish) cooker, and of course, the kitchen still hasn't been overhauled, so why not THINK BIG?
Thank you so much, Joanna, for telling us about this!!

I'm sure you'll have fun with the steam oven, it's great they let you try one. Are you considering having a Miele kitchen fitted?

Trish - I didn't know until a little while ago, either.

Tanna, it was really fun, and I wonder if Miele in the US does something similar. And I'll be in touch about what you'd make in a steam oven

VP, so glad the fungus was true, loved your April fool, you nearly had me ;)

Thanks, Apples and Butter

Alex ... thanks for kind words

Celia, it really is worth a visit if you're planning to make changes in the kitchen. I didn't know about steam ovens, either, for the same reason ... and my cats will be eternally grateful to you for the suggestion about the heated drawer ;)

Zabeena, DO go, you'd love it, and you'd definitely start saving for one of their ovens

Sam ... that was a fun day, really enjoyed it - and, yes, the little bit of my kitchen that needs remodelling is going to be kitted out with Miele - then I'll never have to do it again. The question is whether or not I'd actually use a steam oven. I'll be blogging about it soon

I own an oven with steam from Miele, I bake most of my breads with it, I won't miss it any more

I've just looked at your links, and seen the wonderful bread you have baked in your steam oven ... I clearly have a lot to learn, really fabulous. Thanks for the comment