Some thoughts on pizza and authenticity 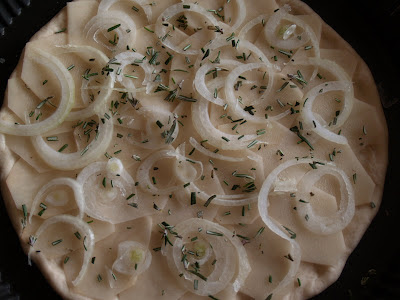 The idea of authenticity in cookery has become powerful, courtesy of research-heavy recipe books ... Elizabeth David, Jane Grigson etc. The writer visits archive / goes abroad, finds a recipe, preferably a peasant recipe, and sets it in stone. It becomes the grail to which the rest of us must aspire. This is followed by a trip to the supermarket for far-flung ingredients - a couple of decades ago, this was fraught with difficulty (you needed a back-up plan, because it was likely that even the biggest and best supermarkets didn't stock, say, Puy lentils, or coarsely-ground polenta). These days authenticity is less work, as we (in the west) expect to be able to buy what we want when we want, regardless of geography or nature.

The problem with authenticity is that life isn't like that. The peasant will make the dish with whatever comes to hand (or not make it because it is no longer possible/seasonal). It will change subtly over the course of a season: the ingredients are local because they are not flown in from the other side of the world, or trucked in from the other side of the continent. And when the recipe moves to another locality, it is altered to fit in with the new circumstances, sometimes resulting in a completely new dish. This approach is now, in the West at least, history (although there are plenty of people who think it's going to be forced on us soon by an energy crisis).

All this by way of introduction to a passage about pizza in Majorca: the pizza can be traced back to the Etruscans; at the Pizza Museum in Italy, historical research based on archaeological excatavtions refers specifically to the portada, a round savoury tart identical to (Majorcan) coca de verdures. What we have (in Majorca) is the authentic pizza which the Romans taught us to make when they settled on the island; we've carried on making it in exactly the same way. There are more than 400 recognized ways of making pizza, and 1,000 variants of each recipe; everyone has added his own particular stamp."

Two thoughts: authenticity here is understood to be a method rather than a recipe. And I bet the 400,000 recipes don't include pizza with ham and pineapple, or with vindaloo. Each - mystifyingly - much loved in their countries of origin (both far from the Mediterranean).


This post is prompted by Tomas Graves's book, Bread and Oil, Majorcan Culture's Last Stand. Too early to say exactly what I think of it, as I'm only on page 46, but so far it's interesting, if a little fierce.

The photograph is of a potato pizza I made recently. It seems such an odd combination, but it is one which works well (so long as you ignore the health police, who seem to have it in for potatoes, but that's a whole 'nother story for another day). Mine wasn't good enough to pass on the recipe, but if you're interested in making one, you should consult Tanna at My Kitchen in Half Cups.


Links to pizza on other blogs

Susan at Farmgirl Fare is a great baker, setting up her own bakery, and knows a thing or two about pizza ... there are lots on her site
Lemon pizza from the Wednesday Chef .. yes, I'm not sure about that one, either ;)
Gluten-free pizza from Karina's Kitchen

Authentic is a powerful and loaded word isn't it Joanna. You have hit this one straight on the head. The real idea is these classic authentic dishes represented what the cook had to work with on the spot and not flown around the world.

The question is do you want to re-create that which somebody has decreed to be the authentic version (and therefore set forth the scene for internicene warfare which would make King Lear look like a chimps' tea party) ..... or do you want to cook good food, with what you have to hand. Which is what those who created the "authentic" versions were doing in the first place.

Recipes are wonderful to read and great guides, but they are not maps set in stone. That's why blogs such as your's are so great. Food, cooked by people who love food not by automatons who can only cook by prescription.

I'm reminded of a dinner at a New York pizzeria with my dad and his cousins (all italian americans). I had the nerve to ask what kind of pizza we were ordering and their response, in a Sopranos sort of accent was, "whatta ya mean what kinda pizza? Pizza is crust,sauce, and cheese. Nunna that other fancy crap." But we quite enjoyed our ham, pineapple, green chili, onion and parmesan cheese tonight!

Potato pizza is a wonderful thing, especially with rosemary (and "authentic" too, in that it's a combination found in Italy - there's a wonderful bakery in Campo di Fiori market in Rome which sells the nicest potato pizza I've ever eaten).

On the use of "authentic" recipes - I find such things fascinating, mostly I suspect because I see food and history as inextricably linked. But as with any historical document, a dish or recipe is merely a snapshot of a moment in time (and speaking as in inveterate tweaker of recipes, nothing stays "authentic" for long in my kitchen!)

Yes, Mel, I couldn't agree more ... and the snapshot of our times we get in many modern recipes is that we have broken our links with nature and the rhythms of the earth. Only connect.

Next time I'm in Rome (I wish!), I'll be sure to visit that bakery

Pizza..majorca... threw me into a revere about Coca Mallorquina, possibly the finest cheeseless pizza in the world. Wonderful recipe in Wendy Cook's "Biodynamic Food & Cookbook" that includes the juice and zest of an orange in the (very very thin) pizza base, and chard,peppers, saltanas, pinenuts amongst other things, as the topping. Yummy yum yum

Olive O that sounds WONDERFUL - and a book I haven't heard of - are there lots of good things in it? Worth buying?(!)

It's one of my favourites, I like the heart with which it is written.The first third is ideas and info around food and biodynamics and the rest is a really nice mix of recipies divided by season(covering veggie, meat, fish and puds). If you wanted a peak you can "search inside" on amazon.
I'll be with you in spirit for "One Local Summer"....still no blog

Hi Olive O ... I had a look at it last night, and thought it looked good, so I will probably succumb before too long.

On One Local Summer, there are a number of participants without a blog, so if you'd like to make a contribution, don't let that stop you - I'd be happy to publish a guest post. Email me if you're interested, and we'll make a plan

Very, very interesting. I have always thought of the concept of an "authentic" recipe akin to geopiety (you know, that whole "My town/country is 'God's Country" aka somehow a notch above others).

Why is a recipe "authentic" because that's the way one family or region has made it for years? In my case, you wouldn't want my family's "authentic" recipes. Cabbage and potatoes and eggs boiled to death? Um. No thanks.

Think I'll go whip up something unauthentic and profane.

Yes, there's a lot in common with geopiety (great word Karina). The method not the ingredients, that seems to me to be where you find authenticity - and so all those wonderful hybrid pizzas, that no Italian would eat, are authentic for their constituency ... vindaloo for Brummies, not quite sure what for New Yorkers etc etc. The world is a better place for integration - we could probably do with a bit more ;)