How to stop your watercress getting jet lag 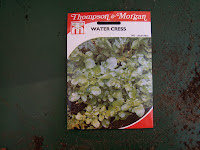 This morning my watercress seed arrived ... I love watercress, the peppery tang of it, especially in an orange salad, but haven't been able to buy it for ages, because it's flown here from America, and it's nearly two years since I bought any veggies with jet lag. When I was a child, we ate watercress from the beds at Ewelme, a village less than 10 miles from here. Now the beds are banned from commercial use, even though they have been recently restored. No wonder we have global warming!

So, the plan is to grow it. I got the idea from the Cottage Smallholder, who gives detailed instructions for growing it, and who makes it sound easy. It never occurred to me before that I might be able to grow it, so I sent off for the seed straight away, as it's never on display in garden centre seed racks. It says on the back of the packet that if you cloche it when the weather is cold, it will keep on growing until Christmas. This is the first sowing of my campaign to grow fresh green salad throughout the winter. I'll keep you posted.

I'm entering this for weekend herb blogging, hosted this week by Haalo at Cook (almost) Anything at Least Once. I find that once something's growing in my garden (and this one is going into pots, so you don't even NEED a garden), I'm more likely to eat more of it.

Watercress is one of those easy plants that like to be constantly pruned: the more you pick, the more you get. Make sure you pick the stem just above a pair of buds, so that the plant bushes out to make more and more buds for you to pick.

So long as the cottage smallholder is right in saying that the seed germinates freely, then this is easy, easy gardening. I hope that this post inspires someone else to give it a go.

This sounds great. As a child I used to live opposite the watercress beds in Ewelme, in what used to be the store. We moved house when I was very young, but the taste for peppery watrecress stuck.

This is a great site, Joanna. Thanks for mentioning my blog, much appreciated.

My watercress has germinated in our cold greenhouse (it took about a week). I'm keeping the compost fairly wet and a cover on at night.

It turns out the my mother used to grow watercress when I was a child. She suddenly started to flap about the nasties that breed in water and gave up. She is keen to have another go so I've germinated cress for her and John Coe (our vegetable mentor).

The cress that we cultivate tastes wonderful. It's well worth growing.

I can't wait to hear how it grows.
I tried, unsuccessfully, to grow it in a small stream by my house in Andorra. Could have been too cold at night for it - or it could have been my ineptness as a gardener....

I love watercress, but I doubt if it would grow here where it's so dry. Hmmm. Maybe I'll have to research it a bit.