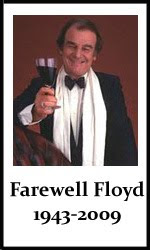 Okay, so this is homage to Keith Floyd. Actually, it's straightforward French regional cooking, but when I think of Floyd, I think of fish and France. Whatever, it was utterly delicious.

In the 70s, my husband, an unlikely restaurateur, came back from Harvard Business School and started what he hoped would be a small chain of American hamburger joints (in the days when hamburger was, in Britain, synonymous with Wimpy, as that's all there was). Right around the corner from his restaurant at 2 The Mall, Clifton (there used to be peurile jokes on the fascia, viz, to them all, omnibus) was a wildly successful student dive run by a wildly flamboyant cook called Keith. The kitchen was more or less two rings at the back, there was plenty of cheap food and loads of booze. Keith was running his restaurant for the cooking and the craic, and not making much money. So he sold the restaurant to a couple who thought that they could do better: they'd clean it up, enlarge the kitchen, squeeze a few more tables into the basement ... and the crowd moved on, and it closed down.

In the 80s, newly married, I saw those first episodes of Floyd on Fish when they were broadcast in the West country, before he went national. Our telly was a tiny black and white affair, not very well tuned (I don't suppose we had an aerial on our roof, but our house on the cliff at Totterdown towered above Brunel's elegant curved railway station which must have helped). Despite these visual handicaps, it was easy to see that here was something different - the table set on the deck of that trawler, the huge wine glasses, the enthusiasm, the music, especially the music. You really couldn't imagine, say, Delia, using a theme tune by The Stranglers.

All in all, not difficult to join Julia from A Slice of Cherry Pie and James from Back to the Chopping Board to pay tribute to someone who brought so much fun to the kitchen. 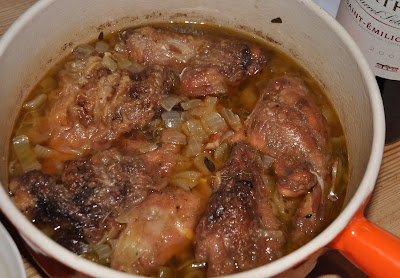 This traditional French way with rabbit is delicious ... and I was very amused to find on the Keith Floyd website that the details are not well worked out - the recipe published there is actually two jammed together, which meant that a certain amount of extemporising was necessary. I stuck with the original title, but I could have gone the other way, ditched the prunes, armagnac and cream in favour of white wine and tomatoes. Next time. Cheers, Keith.

Wild rabbit with prunes and Armagnac

If you don't like rabbit, this is good with chicken. But if you haven't tried rabbit, DO give it a go - so long as it is wild rabbit, not farmed, which has a tendency to taste of fish, whilst being flabby ... none of the virtues. Wild rabbit, on the other hand, has had a good life, is tasty (much tastier than even the priciest chicken), firm, and very very cheap.

You might like little round onions for this, in which case peel them. Otherwise chop a large onion and sweat it in a little oil with the diced bacon. When they're nearly done, add a little chopped garlic. Do this in a heavy-based casserole. Meanwhile, dust the rabbit joints with seasoned flour (you could put a little mustard powder in for extra depth of flavour), and brown them in butter and oil in a frying pan. When they are done, add Armagnac to the pan - if you are Keith, you flame it; if you are me, you can't get the liquor to light (but it doesn't really matter). Chuck all this into the casserole, with prunes (soaked, if necessary) and chopped thyme. Pour in a little chicken stock. (Would it be boasting to say that I used grouse stock? I thought it was a suitably flamboyant touch, in view of my failure with the flambéing.)

Simmer for 40 minutes. When it's done, add a splash of cream. Mmm 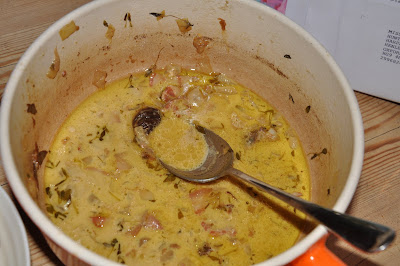 Prunes should be used more! I loved them...especially prunes wrapped in bacon at Christmas x

Fantastic looking dish there, and I'm very impressed with your grouse stock. Great entry, thanks.

Thank you for sharing those memories! What a fabulous post, and a really delicious-looking dish.