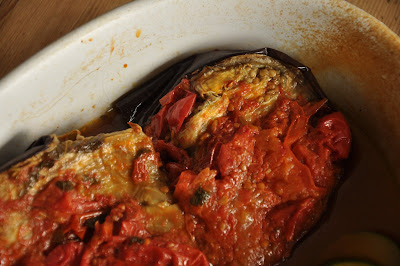 My sister and two of her sons are visiting from California, so we're at least eight for every meal - more often, though, into double figures, and fetching chairs from all over the house, even when we're eating in the garden.

The tomatoes in the greenhouse are a tangle of good intentions thwarted, but even so, there is lots of fruit to pick if you can find it in the jungle of untied plants. And so our salads have been beautiful. 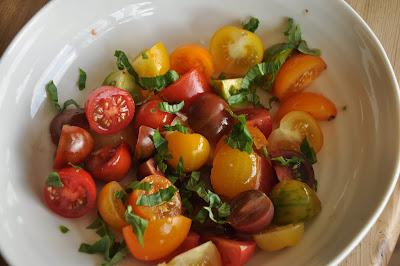 With so many in the house, food needs to be simple to produce - but with so many young men, it also needs to be plentiful. Last night, we ate roast chicken, roast potatoes, courgettes, and a simple imam biyaldi, which I made by splitting aubergines lengthwise, baking them in a hot oven for 20 minutes before smearing them with a tomato sauce made by cooking down the remains of a tomato salad. They went back into the oven for another 10 minutes or so.

For pudding, we ate Tartuffo - my pa, who is in his late 80s and no longer eats much, had thirds, fourths, possibly even fifths. It's Willie Harcourt-Cooze's recipe, and I made it with his Peruvian Black chocolate and lovely yellow Guernsey cream from the Berkeley Farm dairy on the Marlborough Downs. The pudding was stirred while my sister and I caught up with a year's worth of family minutiae ... it doesn't get much better. Except that tonight, my sons are going to cook the roast potatoes, always a good moment, and my father has ordered one in the shape of the Eiffel Tower.

A couple of summers ago, the boys were adamant that my "girlie" roast potatoes didn't quite cut the mustard, and so we ate them three nights in a row, while everyone put their oar in ...

and then, a little later, disaster struck the water supply, and I was reduced to buying Frozen roast potatoes


Things to do with tomatoes

Links to tomatoes on other blogs

Fried green tomatoes - haven't you always wanted to know how to make these? Here's how, from the blog at the Whistlestop Cafe
David Lebovitz's take on an heirloom tomato salad
Gazpacho from Kalyn's Kitchen